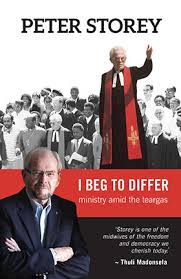 ‘Let me say to Mr Botha: apartheid is doomed! It has been condemned in the Councils of God, rejected by every nation on the planet and is no longer believed in by the people who gave it birth. Apartheid is the god that has failed … let not one more sacred life be offered on its blood-stained altar…’

This is what Bishop Peter Storey preached in 1986. Challenging apartheid wherever he could, he led the Methodist Church of Southern Africa into what many white congregants saw as uncomfortable ‘political’ territory.

Join him in his inspiring journey from sailor-turned-minister to the South African Council of Churches leadership in its darkest hour, from tending to Robert Sobukwe and Nelson Mandela on Robben Island, through the forced removals of District Six and to the storm surrounding Stompie Seipei’s murder. I Beg to Differ spans a humble parish minister’s sorrows and joys, his founding of Life Line SA, the bombing of Khotso House, a close shave with death with Archbishop Desmond Tutu, and the Truth and Reconciliation Commission. In his own words, Storey shares his convictions that inspired him to speak out and minister fearlessly amid the teargas, violence and intimidation of the apartheid regime.

‘Storey is one of the midwives of the freedom and democracy we cherish today.’ Thuli Madonsela

‘One of the most compelling, compassionate and courageous accounts yet of a life lived under apartheid. It’s a thriller – I read the book in one sitting.’ Jonathan Jansen