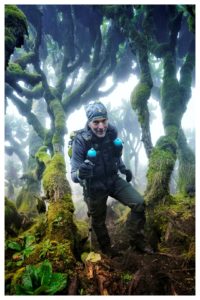 Peter is one of the world’s top professional endurance adventurers, highly sought after international business & inspirational keynote speaker, bestselling author and father. He has taken part in, and lead, many expeditions. From crossing vast deserts, rowing oceans, trekking through central African forests and the poles.

He won the pairs division of the 5500km unsupported Trans-Atlantic Rowing Race, the first for any African. He later spent 76 days alone in a 7 meter rowing boat crossing the Atlantic. As one of the first ever Africans, he made an unsupported race across Antarctica to the South Pole, covering a total distance of 888km’s in one of the most hostile environments known to man.

He has become globally known as a specialist in corporate and personal resilience and the ability to persevere in a dynamic and turbulent economy. He has worked with major corporations across Africa, Europe, Middle East and USA. Peter takes the lessons learned from his expeditions and relates them to the business environment. His expedition stories are of survival, courage, perseverance, passion, loneliness, tenacity, amazing team work and the will to win.

Peter’s presentations take people on powerful life-altering journeys, changing the way they think about themselves and their businesses.

‘Every venture you embark on, both in a professional and personal capacity, will demand clear vision, dynamic strategy, precise planning and preparation, absolute honesty, integrity and fearlessness, but above all it will demand GRIT, perseverance!! So if we put the right processes in place and we persevere we will absolutely be able to achieve those things we have considered ‘impossible’ before.” – Peter Van Kets