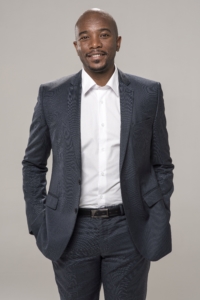 Mmusi Maimane is the Federal Leader of South Africa’s official opposition, the Democratic Alliance (DA). He also is the Parliamentary Leader of the opposition in the National Assembly of South Africa. He was formerly the DA’s Deputy Federal Chairperson, the DA National Spokesperson and the Leader of the DA Caucus in the City of Johannesburg Municipal Council.
He grew up in Soweto outside Johannesburg and lived there most of his life. He is married to Natalie and has a son Daniel and daughter Kgalaletso (KG).
Through sacrifice, hard work, and a desire to use every opportunity afforded to him, he has been building an impressive career in business and has dedicated himself to community work in various ways.
Mmusi Maimane worked as a business consultant and trainer with a number of firms in South Africa and internationally. In addition, he is a philanthropist and chaired a number of NGO boards. The foundations he is involved with are primarily focused on rural youth development. He deeply cares for young people, especially the excluded.
He earned a bachelor’s degree in psychology from the University of South Africa, a master’s degree in Public Administration from the University of the Witwatersrand and a master’s in Theology from the University of Wales. Mmusi Maimane was voted South Africa’s up and coming young person and also nominated in the World Economic Forum Young Global Leader’s programme (WEF). He currently serves as the Chair for the Southern African Partnership for Democratic Change (SAPDC) for opposition leaders in Africa
Mmusi Maimane is passionate about South Africa and is determined to fight for the improvement of Quality Education, Advancement of Youth Employment and Economic Growth in South Africa.